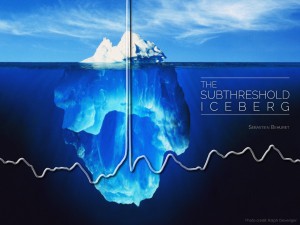 Membrane potential fluctuations can be compared to an iceberg, with subthreshold activity hidden under the surface.

Subthreshold membrane potential fluctuations are a key aspect of neuronal activity, which is often overlooked in today’s neuroscience. They can be compared to the submerged part of an iceberg, with action potentials forming the visible tip above the water surface. An important factor of membrane potential fluctuations is that they reflect the activity of thousand of pre-synaptic neurons, and constitute a complex signature of the pre-synaptic networks that are engaged during spontaneous and evoked activities.

In order to decrypt the information carried by subthreshold activity, membrane potential fluctuations need to be decomposed into conductance components, which directly relate to the dynamics of synaptic bombardment. Higher-order statistics extracted from these conductances provide important information on the organization of the synaptic subnetwork that is connected to a neuron. Specific network features extracted from conductance statistics can then be included in computational models of activity, and evoke in targeted post-synaptic neurons high-order statistics similar to those observed in biological neurons. Therefore, this kind of model can bring significant insights into the activity structure of biological neuronal networks.

Subthreshold activity also plays a key role in synaptic integration and sensory information transfer. The functional impact of synaptic bombardment can be investigated using dynamic clamp, a tool that allows an experimenter “to speak the neuronal language” by connecting living biological neurons to artificial neurons and synapses. With dynamic clamp it is possible to control the contextual synaptic environment of a neuron, and assess its functional impact on sensory integration. By playing on synaptic conductance parameters, the spiking probability function of individual neurons can be tuned. At the level of the neuronal population, a property that could participate to the cellular mechanisms of selective attention emerges, where the desynchronization of membrane potential fluctuations across neurons facilitates the transfer of sensory information.

How can these mechanisms impact the brain? We constantly receive much more sensory signals than our brains can effectively process. Selective attention, which allows the brain to solve this problem by selecting relevant information while suppressing irrelevant, could implement these mechanisms at the cellular level. By tuning the subthreshold activity in targeted neuronal populations, the brain may enhance or suppress information relayed from a neuronal population to another. Moreover, when considering subthreshold activity synchronization across neurons, a dynamic map of activity synchronization, similar to the cortical orientation preference maps, could reflect information selection in the brain, informed by the modulating feedback that originates from higher areas.

This site uses cookies. By continuing to browse the site, you are agreeing to the use of cookies.I Agree